A call for more good at Goodstock. Got any ideas?

On October 7th and 8th, our company will do another 24-hour round-the-clock marathon, donating advertising and marketing goods and services to Dane County non-profits. It’ll be our sixth year. So far, KW2 and its partnering businesses have contributed almost $1.5 million.

Since non-profits are businesses, and they’re constantly strapped for cash, time and expertise, and they do so much good for so many people, we think this is a nice way to help out, while making our community a little better.

It’s wild. We pick about 10 non-profits (out of about 350 in Dane County), and literally, from noon on Thursday to noon on Friday, we sprint and think and work and drink Red Bull to complete thirty to forty different projects, from TV commercials to logos to public relations proposals to web-based tools. It’s exhausting, but immensely gratifying. We reveal the work at a big party at the High Noon Saloon.

But we want to do more good this year by asking others to directly help some non-profits on the 7th and 8th as well. Not at our offices, and not through us, but on their own. What can individuals, and schools, and groups and associations and businesses do? Really, anybody can simply contact a non-profit and ask what they need, right? How hard is that?

I thought we could ask senior citizen centers to contribute baked goods, or knitted stuff to soup kitchens or homeless shelters. We could ask schools to have kids to take the 7th to make some cool, inspiring art. Maybe some non-profits just need a new coffee pot, or copy paper, or new toys, or a rake, or a fridge, or gift card to Office Depot. Businesses can allow their employees to take the day off and volunteer. And then there’s the old stand-by, writing a check. Even in this economic fun-house we’re in, lots and lots of businesses can afford to cut a $50 check.

Think of how much extra good we can generate in just 24 hours. It’s exciting.

Do you have any ideas on how we can get more folks to do more good for non-profits on October 7th and 8th? Please let me know. Thanks. 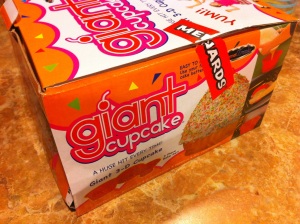 What’s weirder? That the Wisconsin-based do-it-yourself home improvement store that will save you big money on drywall and hammers also sells giant cupcake kits? Or that the cupcake is advertised on the box as 3D? I’m (kind of) amazed that some genius actually approved “3D” on the box. Okay, I’m not even remotely amazed. But it is true. As you can see, the actual resulting cupcake has not one, not two, but three dimensions. Is it a good idea for Menards? We’ll see in a month if these kits are still on their shelves. In 3D.

Sergey Larenkov is a Russian photographer. He took a common tactic, recreating historical photos. Like the books Seattle Then and Now, and Double Take by Madison photographer Zane Williams.

I bet if you’re from Leningrad, this Photoshop idea stops you cold in your tracks.

The idea of theft: Nissan rips off Sony, who ripped off Letterman, and thanks to slo-mo smashings, it’s a good theft.

I once had an art director partner who said “If you’re going to steal, steal from the best.”

First Late Night with David Letterman had a bit where they released zillions of balls down a hilly street. Wow, what a fun mess.

Then Sony had this wildly popular ad to introduce the Sony Bravia LCD TV. They used 50,000 balls, and it was shot over four days. (Many, many interns collected all the balls. Gotta love interns.)

Earlier this year, Nissan has successfully, in my opinion, ripped off Sony with this ad for Qashqai. (An interesting, non-Google friendly name for a car, taken from a Turic-speaking people in Iran.)

Once sign of a good idea is its legs, or its ability to extend into more and differing communications. And the Sony brand has enjoyed the legs of the Bouncy Balls ad. Here are some examples.

An iteration, this time with paint instead of balls:

An iteration using Post-Its in India:

The Wormfarm Institute, pushing how we think about food and art.

One definition of an idea is “a new combination of two existing ideas.”

So, take culture, smash it into agriculture, and you’ve got The Wormfarm Institute, a group in Reedsburg, Wisconsin dedicated to fusing arts and eats.

Two Chicago ex-patriots, Donna Neuwirth and Jay Salinas, started it as a CSA, and they’re gradually developing some really, really cool ideas that push how we think about food, agriculture and the arts.

Their Woolen Mill Gallery displays art, and offers lectures and discussions on food. They offer artists in residency. Here is a great story on their roadside culture stands, as seen in the photo above, in the Milwaukee Journal/Sentinal.

Hats off to these folks, and their extremely cool idea.

Man, this is one of the funniest Facebook posts I’ve read. It’s one of those ideas that certainly has been done. If not, Amy Chaffee, you are a supergenius.

**Warning: the YouTube clip above contains a bit of language.**

Time has a great post on what Brettney has fed to his fans and the media for the last 8 (!) years. Since it’s one of those multi-click experiences, I copy/pasted his brilliant quotes in one convenient place. Here they are.

“I think about retirement a heck of a lot more than I used to…I miss home. I know it’s nuts but [head coach] Mike Sherman told us today that he was giving us Saturday and Sunday off this week, and the guys were all excited. All I could think was, I wish I could be on my lawn mower back home.”

“If I had to pick right now and make a decision, I’d say I’m not coming back.”

— Favre, in an interview with ESPN

“If today’s my last game, I want to remember it. It’s tough. I’ll miss these guys. I’ll miss this game. I just want to let everyone know that…I didn’t plan on doing this. Way to put me on the spot.”

— Favre, in an interview with NBC’s Andrea Kremer after the Packers’ 26-7 Week 17 victory over the Bears

“I have no idea where that came from, but it certainly didn’t come from me. I’m happy about my decision and I haven’t once said, ‘I wonder if I made the wrong decision.’ I know it’s the right one. It’s kind of funny. Even when I’m retired, they won’t let me stay retired.”

— Favre, in an interview with SI.com regarding claims that his agent is making inquiries to other teams about a trade from the Packers

“I haven’t talked to anybody. He could come back and win [another] championship like some other quarterbacks. He’s so popular that it would be great if he did come back. But as far as I’m concerned, stick a fork in him.”

— Favre’s agent, Bus Cook, in an interview with AOL Fanhouse

— Favre, in text messages to unnamed teammates, via a report from ESPN NFL Insider Adam Schefter

You may have seen this great effort from Levi’s and Weiden & Kennedy (the same company behind the Old Spice “I’m on a Horse” ads). They all hunkered down in the city of Braddock, Pennsylvania just outside of Pittsburgh, and didn’t just shoot some TV ads. They invested real cash money into its community center, library, and an urban farm.

It’s a fantastically cool idea. Advertising, reality TV, cause marketing and economic investment, all in one. Awesome. It takes a lot of hustle to pull something like this off.

Levi’s got a lot of crap for doing this. “Why didn’t they put jobs into Braddock?” “Why help just one city?” “Levi’s are made in Mexico, not the U.S. for Pete’s sake!” Parts of the ad community hammered it, calling some of the lines trite (“We are all workers”) and the whole thing too precious. It stirred up debate. Good.

Listen, Braddock is hosed. This town is dying before its eyes. But Levi’s put $1 million into this dying city. The State of Pennsylvania didn’t. General Motors didn’t. The critics who called the advertising crappy didn’t do a damn thing for Braddock, except help raise Braddock’s search rankings. Levi’s got off it’s denim ass and tried to do some good, and should get some karma points for that at the very least and profit at best.

I’m a die hard Levi’s guy. It’s practically all I wear. And despite thinking that most of their advertising has stunk for the last 15 years (including the Spike Lee stuff – sorry Spike), I really hope this one works for Levi’s. They’re sales are up worldwide 8%, so it may be doing them some good. But (much) more importantly, here’s hoping it does some good for the people of Braddock.

With a name like Biff Blumfumgagnge, this creativity chat should be pretty boffo.

I’m excited about my pal Biff coming into the office on the 25th to talk to KW2 staff about creativity and ideas. He’s an inspiring fella.

In 1986, Biff and I were in ComedySportz, an improv comedy group. He was also in a band called The Gomers. He asked me to join the band that year, and outside of the Watertown Junior High and High School bands, it’s the only band I’ve ever been in. These days The Gomers play 8 to 10 times a month, and I join them once or twice.

Biffy is one of the most creative people I’ve ever met. He’s like Madison’s Les Paul: a ridiculously talented instrumentalist (violin, bass, mandolin, guitar), great singer, studio whiz, and builder of his own musical gear. 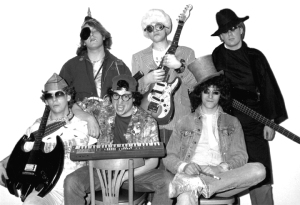 The Gomers, circa 1987. Biff is in the back row, center. The Bifftar that he made is the guitar on the far left.

The Gomers on clown night at the Club de Wash, circa 1988. Biff is on the far right.

In the early days of the band, Biff had the idea to integrate themes into all The Gomers shows. Themes included bacteria, meat & toys, Elvis, and clown night, seen above. They’ve performed as Kiss. Here’s The Gomers Wikipedia info.

Should be a cool conversation.