Super Bowl ad controversy: pro-life in, gay dating out. No word yet on monkeys. 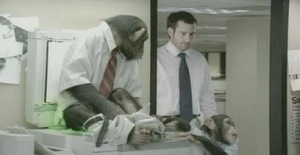 The recession has hit the most expensive airtime on TV: the Super Bowl ad. Prices for thirty seconds of time fell from $3 million last year, to about $2.5 million this year. That could be at least a $10 million loss for CBS. GM is not going to air anything this year. FedEx will be out of the big game again this year. Pepsi, for the first time in 20 years will air nothing. (Coke, by the way, has a very cool idea, and will air ads to point folks to their Facebook page, where you can help them donate to the Boys and Girls Clubs of America. Way to go.)

So CBS and the NFL wanted to make up for lost revenue this year by allowing special interest groups to run ads during the big game for the first time ever. A pro-life ad will be in. But a couple of relatively tame ads have been rejected by CBS: a gay dating service ad from Mancrunch, and an ad from the online name registration company that got this whole “rejected ad!” strategy going.

And surprise, surprise, the controversy has already increased the buzz for those brands. Not a bad strategy if you don’t have $2.5 million laying around. Hey, it works. People talk about the banned ads, which is worth something, right?

(I was on WISC-TV talking about controversy as a tactic this year. I’ll also be doing my annual blog during the game, and a WISC appearance the day after Super Bowl, talking about the advertising winners and losers. I may also once again be on WTMJ radio in Milwaukee. Shameless self-promotion is now over.)

As an ad guy, I know the controversy tactic works. But as a football fan, all I want out of Super Bowl ads is entertainment. Mindless jokes and fun and exploding stuff and monkeys. Entertainment like the kind found in this brilliant educational ad for FedEx. It may be my favorite Super Bowl ad ever, despite the fact that there are no monkeys.

Lace up. Save lives. The (RED) idea continues with shoelaces. 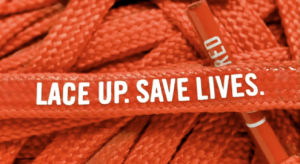 The (RED) campaign to fight AIDS in Africa has a cool new element — Lace up, save lives. Can’t wait to see these red shoelaces adorning our fellow human’s feeties.

(RED) launched (one or two years ago?) with Gap, Nike and Apple, all offering products branded with (RED). Proceeds of these products go to fight AIDS in Africa. What a great new step this is.

Purchasing shoelaces contributing to the fight to do some good on the other side of the world? Great idea.

Zombies + The Beatles = a great idea.

An idea is nothing more than a new combination of existing things.

So says James Webb Young in his fantastic (and short) A Technique for Producing Ideas. For exemplo, if you combined zombies with The Beatles, you’d get a great idea for a band – The Zombeatles.

My pal Steve from The Gomers did just that. It’s a Gomers offshoot band that he’s built into quite a phenomena. Rob Zombie discovered the Hard Day’s Night of the Living Dead video on YouTube as their first-ever guest editor, and it’s since gotten over 1.2 million views. Doug Gordon of Wisconsin Public Radio has had a lot of great fun with the idea. And there have been Wisconsin, New York, New Jersey, Pennsylvania and now Chicago (February 6th at The Abbey Pub) Zombiepalooza appearances.

And now a mention in the New Yorker, which has got to represent some kind of Great American Cultural Litmus Test.

So – combining things can make an idea, but what makes an idea great? When people can run with it, and do new things to it, and have it go on and on, with people continually responding positively. That’s the sign of a great id 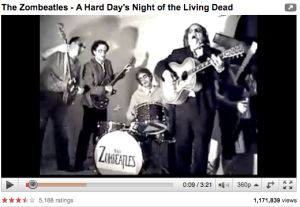 A very wonderful piece of communication.

We’ve made a lot of public service ads over the years. So we’ve studied the category. Sometimes we see successes from ads that use shock value tactics, particularly in the UK. Man, do they love their bloody, shocking, frightening social marketing ads.

But this one is different. Especially for the UK. Which makes it really, really stand out. If you’re in the communications business, that’s what you need to make sure your work is doing: standing out.

This has been getting a lot of buzz on Twitter as the “most beautiful ad ever.” Check it out at AdGabber. http://post.ly/LHPE

The middle of the road is where you get run over.

A simple notion I heard long ago, reminding us that we’re not in the business of forgetability. That’s it. The whole post, right there. The end.

My old friend reminded me to not just look, but see.

I was a bit of a photographer in the `80s. My brother Jeff got me into it in high school, and I worked at a camera/photofinishing store in college, with most paychecks paying for more  film, developing and equipment. Over the 1986 holiday break, a few college buddies took a ski trip to Colorado, but I didn’t ski. So I took a bunch of pictures.

Time passed, and our three daughters came into the world. My Nikon SLR camera was replaced by a “grandma camera”, the do-everything point-n-shoot, and my interest in taking pictures for the sake of taking pictures diminished.

A couple of weeks ago, I decided to push my creativity, and get serious about photography again. These shots are from a morning when much of Wisconsin woke up to a surreal, bright haze. I thought I’d capture the big, weird, wide eerieness of the haze. But literally, within one minute, my assignment changed, as I remembered one of the great lessons from my earlier days as a photographer – the difference between “looking” and “seeing.” Welcome back, old friend.